white glove on my left hand

Wearing a white glove on my left hand, armed with a marker and a grease pencil I started to write on the reel. A 1/1-1 at Start E 1/1-1  at the End, marking the clap with a framed X. Well of course there's more to it but Those were my first steps into film-editing, as in film film, the stuff "dreams are made of" sliding through my fingers. It's been at least ten years since I first sat in front of a Steenbeck editing Machine, but this time I got some instructions. Real instructions because this year all our projects at the HFF-Potsdam will be edited directly in 16mm without digitizing the footage. It's funny how tangible film can be, and how synching can be so dependent on something like the length of your audio role. You can't just have it work in the machine it has to have the right length in order to be sync.
Problems, or obstacles arise quickly in this world of old school editing, so patience is a must. A spiritual asset that I should order by airmail or I'll be banging my head against the table sooner than I think. Unless I remind myself of the privilege that it is to edit on something that will no longer exist. Just in the same manner that some people will never shoot onto it and much less project it directly into a movie theatre, Oh, yes I'll just keep reminding myself of that each and every time I feel that something isn't working like it should or would if I only would be sitting at my PC.

Posted by Reinaldo at 23:14 No comments: 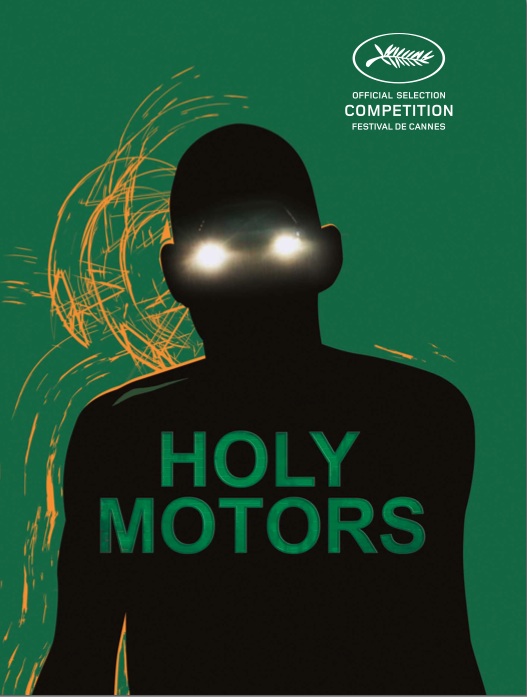 One might question many things when being confronted with a story. Be it in the form of a song, a novel, a play or God forbid a motion picture (yes a talkie), there are things we can accept and things that make us frown.
But when we take a look at the moving picture that is made out of several moving elements one must admit that editing or montage allows us to accept events as being natural, or a convincing copy of the nature that we perceive. The image-movement takes us on a trip that may or not make sense. Holy Motors is one of those compositions in which you have to allow your eyes to take lead as they follow Carax's ensemble.

The storie(s) only start to take place after we see a shot of a movie theatre. I suggest that we are asked to look at ourselves, the audience, and question where we are and what we see. Then we see Carax who awakes in his secluded room behind the theatre. Then he shows us some paths behind the screen, a secret door that he opens with his  finger/key. A passage to a realm in which he acts as the key master. We follow a large black dog as it slowly walks through the red corridor and towards the screen.   Through this overture Carax achieves at least two things: He sets the tone and secondly he starts to confuse us and bewilder us with magnificent sequences. The juxtaposition of these oeuvres resulted in movements that I did not question for they flowed naturally before my eyes and through my ears. One could say that we're introduced a character who's driven around Paris in a limousine. A figure that dives into other peoples lives and who slips into each role as a service provider. But I suspect that there is more at stake, I haven't had the chance to see the film for a second time, but, I believe that what he is playing with is with our understanding of causality. And that my friends, is something bold. The film's actions or events seem to state constantly "et pourquoi pas?" - why not ?- that is. Why shouldn't we be able to walk around and slip from one body into the next and defy the rules of life and death? It is cinema, this is the land of Holy Motors where your rules are something that need not be. So why sustain the consensual idea that it makes sense or that the audience needs to understand everything that happens, the film asks.  Aristotle's concept of Eikos and Anakainon  (parodon my lack of correct ancient greek) argues that the flow of the story leads us to believe that there are no other options for our heroes. This false necessity creates thus some form of verisimilitude. As viewers often do not question the actions of the protagonists we follow them, be it in tragedy or in comedy given that things happen and move forward. Carax uses a similar form of flow with the help of his medium, cinema, but makes us question this: Why we were expecting something else. Why shouldn't people just get up after being shot? Did you expect to get a list of rules beforehand? So why don't you just sit back, relax and enjoy the ride. You won't understand it all, and you probably won't be able to say the smartest thing at the end of the film. But maybe Holy Motors has created a new form of audience, the suspended one. An audience that questions its own expectations.
Posted by Reinaldo at 18:06 No comments: